About Homelessness | The Coalition for the Homeless of Pasco County

*Totals from District School Board of Pasco County 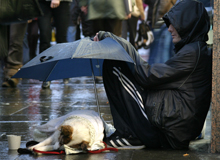 Daily, over 45,000 Floridians live on the street or stay in emergency shelters. Florida has the third largest population of homeless persons of any state in the nation. Not included in the above figure are over 63,000 school-aged children who were identified by the public school districts as being homeless during the 2011-2012 school year.

With the unemployment rates over 10 percent, and the continuing volume of home foreclosures displacing families, the crisis of homelessness continues to grow and claim more victims with no place to live.

Using the most recently available national data on homelessness, the 2011 and 2012 point-in-time counts as reported by jurisdictions to HUD, this report chronicles changes in overall homelessness and in homeless subpopulations between 2011 and 2012.  Point-in-time methodologies vary and are imperfect and, as such, the aggregated numbers do not represent a precise count of homeless people.  The counts, however, when compared over time, provide a way to assess whether the homeless population has increased or decreased (National Alliance to End Homelessness, 2013).